“Tell me and I forget. Teach me and I remember. Involve me and I learn.” – Benjamin Franklin

When you meet a K-12 teacher who’s taught computer science for over 16 years in the American public school system, you know they’ve got a story or two. Meet Paula Perryman, a computer science teacher from Tenino School District, Washington, who’s lived and breathed computer science since the day she became the first kid in high school to have a computer at home. Paula is now a Career Technical Education (CTE) Teacher and a passionate leader of STEAM in her district.

Having grown up with a father who worked for Hewlett-Packard, Paula is a long term, progressive thinker, particularly about technology and the future world of work for her students. She is determined to make the philosophy of STEAM a way of life for her students to set them up for their future careers and ways of working. She believes that by getting students and non-STEM/STEAM teachers to recognize where they are already applying STEAM in their existing classes, they are more interested in wanting to get better at using STEAM values again and again. Only then can STEAM become an enduring, cross-curricular learning method and begin to re-mould established methods of traditional classroom learning for the benefit of the student.

In our previous interview, we spoke to Julia Dweck, who taught us that exploration is the magic that creates the ability to engage, problem-solve, collaborate and be creative. This week we speak with Paula about how she has been introducing kids to computational thinking, what it’s like to teach STEAM in the classroom, and how she draws strength from the great learning moments created by STEAM.

Here is what she had to say.

If you would like to find out more about the power of STEM/STEAM and how to start your own program, check out our resources below:

Niall: Could you tell us about yourself and your teaching background?

Paula: I have been in public education for many years. I started working for the state of Idaho, training in their software applications specifically before it grew. I started working in K-12 schools in 2004. I taught computer stuff, not necessarily computer science. It’s evolved since then and I made the choice to evolve with it. In my last few years I’ve taught introduction to computer science through the TEALS programs. The previous focus was to make our schools 1:1 on Chromebooks, so even our kindergarteners have them. The focus now is to write effective instruction in technology and really branch kids out to computational thinking and start that way of learning at a young age, so that you can begin to set up students for this world that they will soon inherit.

Niall: Talk us through your journey from your first days using STEAM in the classroom to where you are today?

Paula: When I was in school I was the only person to have a computer at home. I really thought I was kind of cool for knowing how to use computers (although that sounds selfish of me). It became something that sets me apart from my other peers at that early age. So, I always tried to be that person because it worked for me and that’s always been at the forefront of my life. Now I tend to be a leader of this whole group of teachers here at Tenino School District. That comes with helping them to understand that they are already doing so much in the classroom that’s STEAM but they don’t recognize it.

STEAM is about getting students to recognize the concepts and algorithms in the work they’re already doing. Once the teacher can recognize what they are doing is STEAM, they are more interested in wanting to get better at using those STEAM values more. That’s where bringing the education technology came in. It engaged the kids in a way they haven’t been engaged before, or think in a different way to having a book in front of them. That’s essentially how we got from the early days to where we are now.

Niall: How do you think STEAM has improved student learning and do you have any interesting stories you could share about using STEAM in the classroom?

Paula: One of my best stories is around the ‘if’ and ‘then’ statements. I wanted to teach the students the concept of ‘if’ and ‘then’. We had kids of second grade doing a slide deck where they “chose their own adventure” story using the words of ‘if’ and ‘then’. We knew we were setting them up with some computational thinking, but when we went into the classroom with the kits for the first time, we did an intro-pair-programming activity using some SAM Labs lesson plans. By the way, the lesson plans are really good and don’t require additional editing. For example, if the lessons say they are for Grade Two, then they are for Grade Two.

In the lesson, one student made the connection between the “choose your own adventure story” and conditionals. She said, “This is like that if/then thingy, like when you were here last time! So what you’re saying is, if I get this wheel to go clockwise and this wheel to go anti-clockwise, then if I put the blocks on my truck, it’s going to drive forward!”. I responded, “YES, exactly.” And this was my first really big success moment, as the second grader was really thinking through the STEAM process. We couldn’t help but high-five. It’s particularly difficult to get students of that age to do that.

Check out this blog article: Teaching STEAM in the Classroom: 5 Ways to Create Authentic Learning Experiences

“The biggest frustration is how do we get children to critically think about their work… they need to know how to accept failure, be critical and reflective… STEAM class provides them with is a safe place to do that without knowing they’re doing it”

Niall: Can you tell me more about learning through trial and error and how that encourages students to make mistakes and solve problems?

Paula: That’s one of the best things about the SAM Labs lesson plans that they really lend themselves to this. One of the things I often find students doing without guidance is to go over to the other teams and ask them how they got something to work, and we encourage that. The way SAM Labs encourages students to break out into groups encourages it too and allows them that independent choice to seek advice from someone who might not be their partner. They generally want to learn from each other rather than from the teacher.

“That was a real high because it was clear they had developed those skills in the STEAM classroom, particularly around collaboration and partnership. And hearing that from another district was a real hurrah moment”

Niall: Have you seen students apply the lessons of problem solving, creativity, confidence and/or collaboration in other subject areas?

Paula: Lots. There have been times where students used those STEAM concepts in other areas. For example, two different classes created monsters and they sent each other instructions and set up a video conference. That way, they were able to collaborate with other classroom groups and give each other feedback, such as, “Here’s how we thought your project would look based on the instructions you gave.” Students were also able to identify which parts of the project other groups should have collaborated to deliver a better monster.

A peer from another district asked me, “What is it you’re doing in that STEAM classroom of yours? Because the teachers thought your kids had some skills!” That was a real high because it was clear they had developed those skills in the STEAM classroom, particularly around collaboration and partnership. And hearing that from another district was a real hurrah moment. We’re kind of getting used to that in Tenino because there’s something about STEM activities that engage students in a different way. 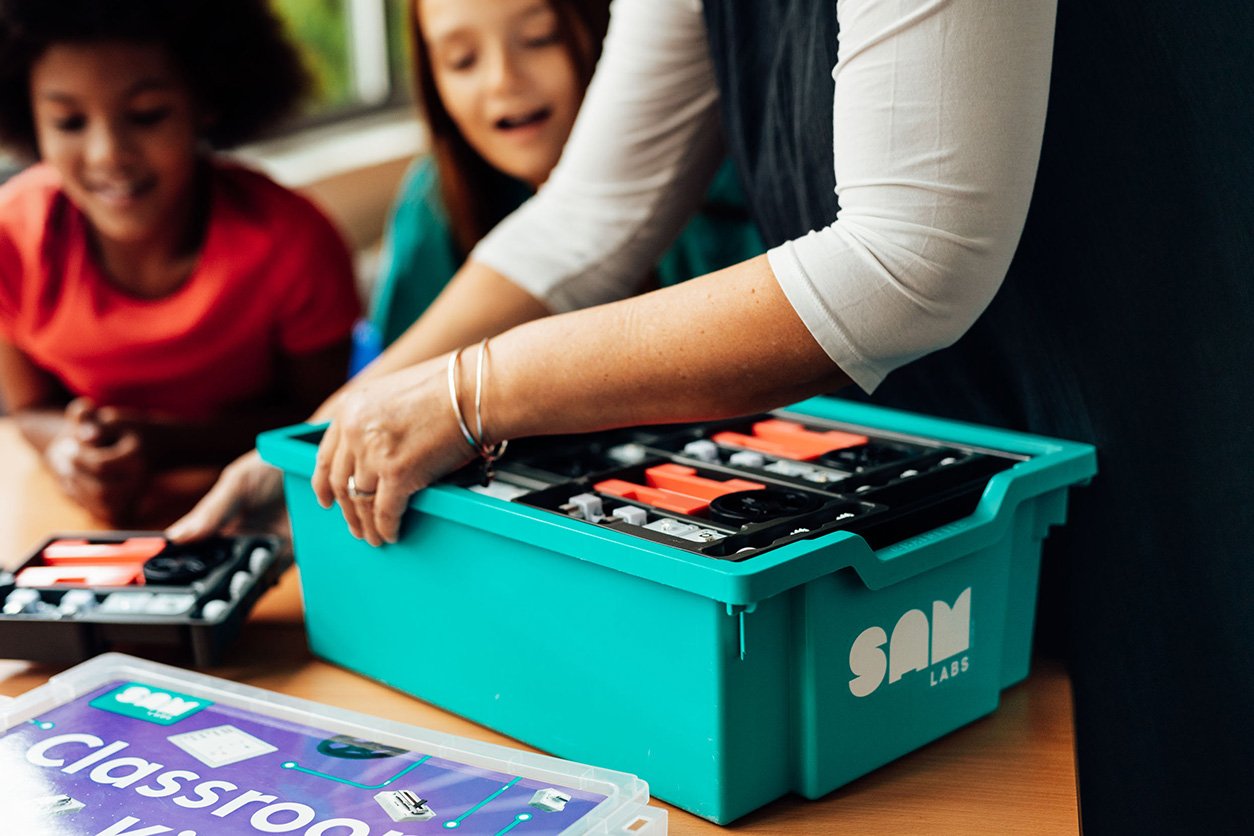 Niall: Why did you choose the SAM Labs solution over others in the education technology market?

Paula: When I first saw SAM Labs at a conference, Morten from SAM Labs was just playing with the light using the sensors and coding app. I thought that was cool and I knew the kids would think so too. So I took that same activity when I bought my kits. I went up to our K-2 school and sat in the library makerspace playing with the light, all through the lunchroom one day s kids would start asking me what I was doing. While robots are cool, students have all seen them before, but there was something about this different thing that they hadn’t seen before. And that’s what got the kids really interested in SAM Labs’ STEAM kit.

Niall: What kinds of issues/frustrations were your school having before STEAM was introduced to the curriculum?

Paula: The biggest frustration, and it still is to some extent, is how do we get children to critically think about their work. It doesn’t matter what grade the student is in, they need to know how to accept failure, be critical and reflective. How to get them to think about their thinking. So what the STEAM class provides them with is a safe place to do that without knowing they’re doing it.

A student one time said to me, “You just fooled us into learning that, didn’t you?” But that’s my intention. On the other hand, the younger kids don’t realize that was my intention. It’s nice to know you’ve learned that skill, so now apply that to other places and that comes not just in the STEAM lesson itself, but everywhere else. The STEAM lesson is super important to their future, their lives, their understanding of how things work. But as far as problem-solving goes, this opens their minds up in ways they haven’t before.

We would like to thank Paula for dedicating her time to us!

Have you or your students created something to inspire new users of SAM Labs’ STEAM kit? Share your ideas with us by tweeting us at @SAMLabs.

Paula Perryman teaches Grade One and Two in Tenino School District, Washington. Paula is a passionate, K-12 computer science and CTE Teacher with many years of experience in public schools. You can find her @techchik_paula discussing the latest computer science news and connecting with like-minded peers at Tenino summits.

Niall is an EdTech writer eager to spread the word about STEAM and coding. Having previously taught as an ESL Teacher and experiencing the same workload stress, he’s passionate about creating opportunities for teachers to have the resources to create the best learning experiences for young learners. 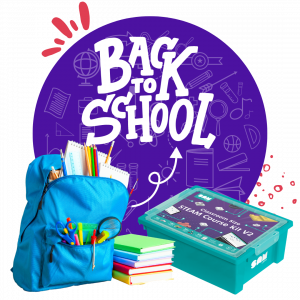